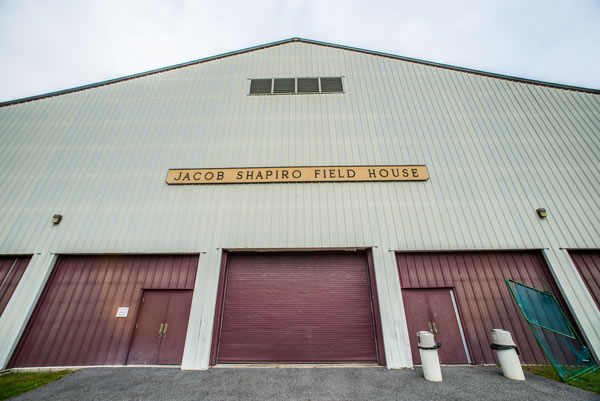 A gun goes off at 11:15.00 AM.Â This is not an unfamiliar sound at the birthplace of ROTC. It was the sound of a starting gun reverberating off the walls of Shapiro Field house, a 50,000 square foot training facility located on the Norwich University campus.Â At 11:15.10 AM, bodies dipped and leaned towards a line 55m and 5 hurdles away from where they had been a mere 10 seconds prior to that moment.

The New England qualifying meet began with the 55m hurdles and dash. Wave after wave, the athletes raced down the straightaway in pre-designated lanes, marching towards the finish line with knees high enough to impress any onlooking cadets. Ian Clough (St. Johnsbury) emerged victorious in both the hurdles and dash, back-to-back events, and his finishing time of 6.53 in the dash leaves him only 0.03 seconds away from the state record set by Eric Groce (Rutland) in 2002. Holy crap, that was 15 years ago! On the girls’ side of the competition, Lydia Pitts (Mt. Abraham) won the 55m hurdles in a new PR and D2 state record time of 8.83, and Sonia John (Rice) took first place in the 55m dash in 7.51.

With the time restrictions from the host institution, the meet ran on an abridged schedule. Triple jump, pole vault, and all three relays had to be cut from the program to meet the demands of Norwich. The entire competition had a very rushed feeling.Â The hurdles and dash were run as straight finals with no preliminary round. An unfortunate twitch by Jenna Puleo (Essex) in the set position lead to a false start, meaningÂ that the top seed in the hurdlesÂ will not be representing Vermont at the New England Championship.

Following the short sprints was the 1600m run. Jeremy Hoyne-Grosvenor (Montpelier) ran a 4:20.57 looking comfortable and playing rabbit for the chase pack that kept it close in the first half of the race. Kent Ford (Burlington) separated from the peloton to run a new PR of 4:35.22. A big group of runners jostled for the remaining top 6 positions, and a trip to the New England Championship. It came down to a sprint for the last spot; runners 6-8 were separated by only 0.34 seconds. I’ll let you in on a secret… you need speed, even in distance races!

The girls race stayed close for the first 6 laps until a group of 6 decided they all wanted to run under 6 minutes, and they will now be representing Vermont. Quinnae Outerbridge (St. Johnsbury) led the way with a winning time of 5:48.31.

The closest and most exciting finish of the day was in the boys 600m run. Here’s a rundown of the top 10 finishers.

I can’t even imagine how hard it must have been to be an official before automatic timing. The girls race would have been easier to call with Sonia John leading from start-to-finish to win the race in 1:44.46.

As athletes checked-in for the 1000m run, there was a big name (not just because it is hyphenated) missing from the group. Jeremy Hoyne-Grosvenor did not come to the table. As we’ve seen in past years, some of the elite athletes elect to focus on one or two events in a bid to move up the national rankings; Jeremy decided to focus on the 1600m run. A collective sigh of relief, followed by giddy excitement, came from the boys receiving hip numbers and heat assignments when they realized that a qualifying spot had opened up in the 1000m run. Having chased Jeremy for 1600 meters earlier in the day, Kent Ford capitalized on the opportunity by being first across the line in 2:46.06.

There were 60 athletes signed up for the 300m dash for boys, and 54 for girls. Top 6 move on to the New England Championship. The competition format called for heats to be run from slow to fast. Round after round, the top 6 would shift around as the heats got faster and faster. It was like a physical crescendo; each group that crossed the line did so with steadily-increasing power and velocity.Â At Norwich, the oval only has 4 lanes that go all the way around. That meant that the top 4 athletes would run together and 2 more would have to qualify from another heat.

Ismail Liban (Burlington) dropped a 36.90, his second consecutive performance under 37 seconds. He is the only boy in Vermont to go under 37.00 this year, but leads a strong group of sprinters to the New England Championship. Sonia John won her third race of the day with a dominant performance in the 300m. Her time of 41.42 was over 1.5 seconds faster than Katherine Cowan (St. Johnsbury) in second.

The final race on the track was the 3200m run, and it almost didn’t happen. The meet moved very efficiently, but the time allotted just wasn’t enough. Fortunately, Norwich yielded and gave the athletes the opportunity to finish the competition. Two sophomores led the way in the longest race of the day; Lucas Calcagni (South Burlington) ran a 10:00.43 and Alexandra Timmins ran a 12:30.26 to take home top honors in their respective races.

In the shot put competition, Tristan Larocque (Chelsea) set a new D2 record with a throw of 46-02.25 feet. There was a mad scramble during the meet to find steel tape in order to validate the record-setting mark. Thank you to the anonymous parent that drove to the hardware store to buy steel tape! Molly McCreedy (U-32) continued her dominance by throwing 37-11.75 feet, outdistancing second place Zea Macris (Lyndon Institute) by over six feet.

Katherine Cowan had two second place finishes on the track, but rose above the rest of the field (and the bar) in the high jump with a leap of 5-04.00 feet. There was a 3 way tie for 5th place as all three athletes ended at 4-07.00 and had the same number of attempts and misses in all their previous rounds. Seven female high jumpers will be representing Vermont as all three athletes earned qualification. There will also be 7 male high jumpers as well because there was a tie for 6th place. Jackson Baker (Essex) won the event by clearing 5-09.00 feet. Elijah Pianka (Springfield) and Sam Velasquez (Essex) also cleared the same height but finished 2nd and 3rd respectively due to theirÂ missed attempts at previous marks.

The entire meet was sandwiched in between boys long jump and girls long jump. Boys long jump began before any of the track events. There was a large field of competitors, and the meet directors elected to have finals in the long jump. Ian Clough took top honors after six rounds of jumps withÂ 20-10.50 as his best mark. The top six boys were all over 19 feet. As the 3200m run finished and the track cleared out, there was still a line of girls by the far wall of the field house. They took turns accelerating towards the board and flying (slightly downhill) into the sand pit at the end of the runway. Lia Rotti (St. Johnsbury) completed the Hilltopper sweep of the long jump. Her best jump was 17-01.00. All of the girls in the top 6Â jumped over 16 feet.

Our picks for athletes of the meet: Ian Clough and Sonia John. Both athletes won 3 events on the day seem poised to carry their respective teams to state titles next week. Speaking of states…

This is just a straight-up, old-fashioned tallying up of the scores based on the athletic.net performance lists. Club teams are excluded from team scoring, so the points are allocated to the next eligible varsity athlete. Â I did not account for athletes that might be ranked in more events than they can compete in because I cannot predict which ones their coaches will enter into.

It’s always interesting to see what the expected outcomes are on paper. However, track meets aren’t won on paper. Sleep well, hydrate, and get ready to spike up.