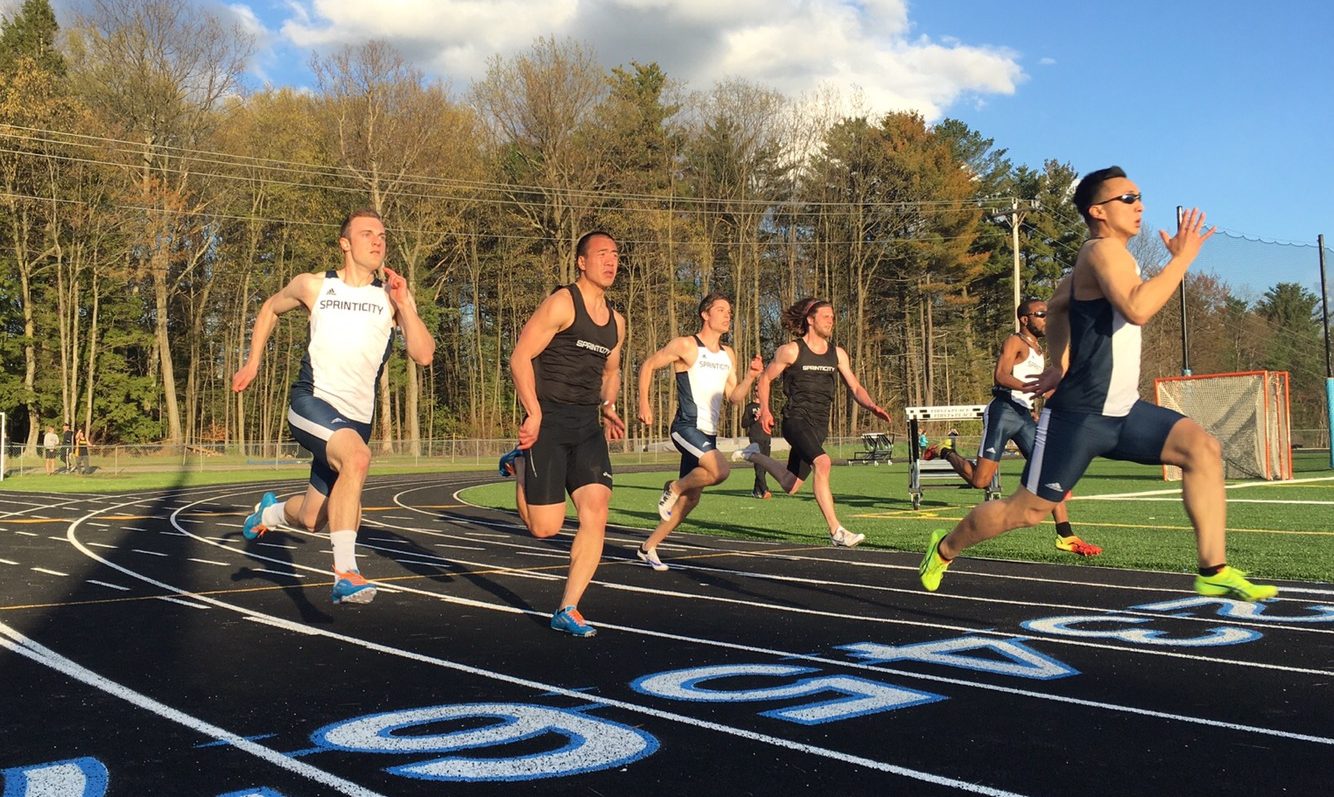 The Fifth Annual Coaches vs. Cancer Twilight meet at South Burlington High School featured 23 Vermont high school teams and about 700 athletes. The meet has seen growth in each of the past five years and this was the largest participant pool yet. This was the first major competition held on the newly refurbished South Burlington athletic facility. The athletes did not disappoint and broke in the new surface by breaking old records. Meet records were set on both sides of the competitions. The girls established 7 new marks and the boys broke 5 records on the day.

There were two girls and two boys that have firmly established themselves as standouts in the world of Vermont Track and Field.

Seth Beard deserves an entire week off. He ran the 100m (3 rounds), 400m, 200m, and 4x400m relay. Somehow, he was able to run a season best in the 400m between the semifinals and finals of the 100m, and still win the 100m. The workload itself is impressive, but to finish in the top 3 in all of his individual races against strong competition makes this a feat that we will remember long after this season is over.

Bill Wood wants you to know that talent can thrive in any division. Representing Division 3 Woodstock Union, Bill took home top honors in the javelin and long jump. His meet record performance of 22-04.50 is just inches off of the overall state record of 22-06.25, a record set by Tom Titus of CVU back in 1969!!! Bill was also the runner up in the 200m to the dominant long sprinter, Ismail Liban of Burlington.

Izzy Giesing dominated during indoor in all of the mid-distance races. She is continuing her scintillating form with a 59.64 in theÂ 400m dash and a 2:17.52 in the 800m. In addition to her performances on the track, she also picked up a 6th place finish in the triple jump. Oxbow can certainly rely on Izzy for massive points.

Sonia John… SHE. DOES. NOT. LOSE! Four events contested, four first place finishes. She was an individual winner in the 400m dash, and 200m dash with a new meet record. Sonia then went on to help the Rice Memorial 4x100m and 4x400m relays take first place over D1 powerhouse, St. Johnsbury Academy, in both of the relays. In addition to the sporting success of establishing a high level competition to advance the sport of track and field in Vermont, the Twilight Meet is also a fundraiser for the American Cancer Society. Over the last 4 years, this track meet has raised about $2,000 for the ACA. The Sprinticity High Velocity exhibition 200m was held to boost theÂ fundraising efforts during an intermission in the meet. Sprinticity Track Club issued a matching donation challenge to the fans in attendance to raise $200, one dollar for each meter of the race.

If the length of the race were determined by the dollar amount, we would have had to change the name of our club to something distance related. This year alone, over $1,000 was raised through our combined efforts. We (Sprinticity and South Burlington High School) would like to thank all of the people in attendance for your generous donations. Our respective families have lost some people very close to our hearts to cancer and your amazing support means so much to us. In the very short term, you can watch a rematch of the Sprinticity 200m at the 45th Burlington Invitational this Saturday, May 13. As for the Coaches vs. Cancer Twilight Open, the plan is to continue growing the meet as a competition and as a fundraiser. The meet organizers envision an event that will attract talent from beyond Vermont, provide more offerings for open division participants, and continue growing the annual contribution to the American Cancer Society.

Oh… and more bathrooms. There will be more available next year.