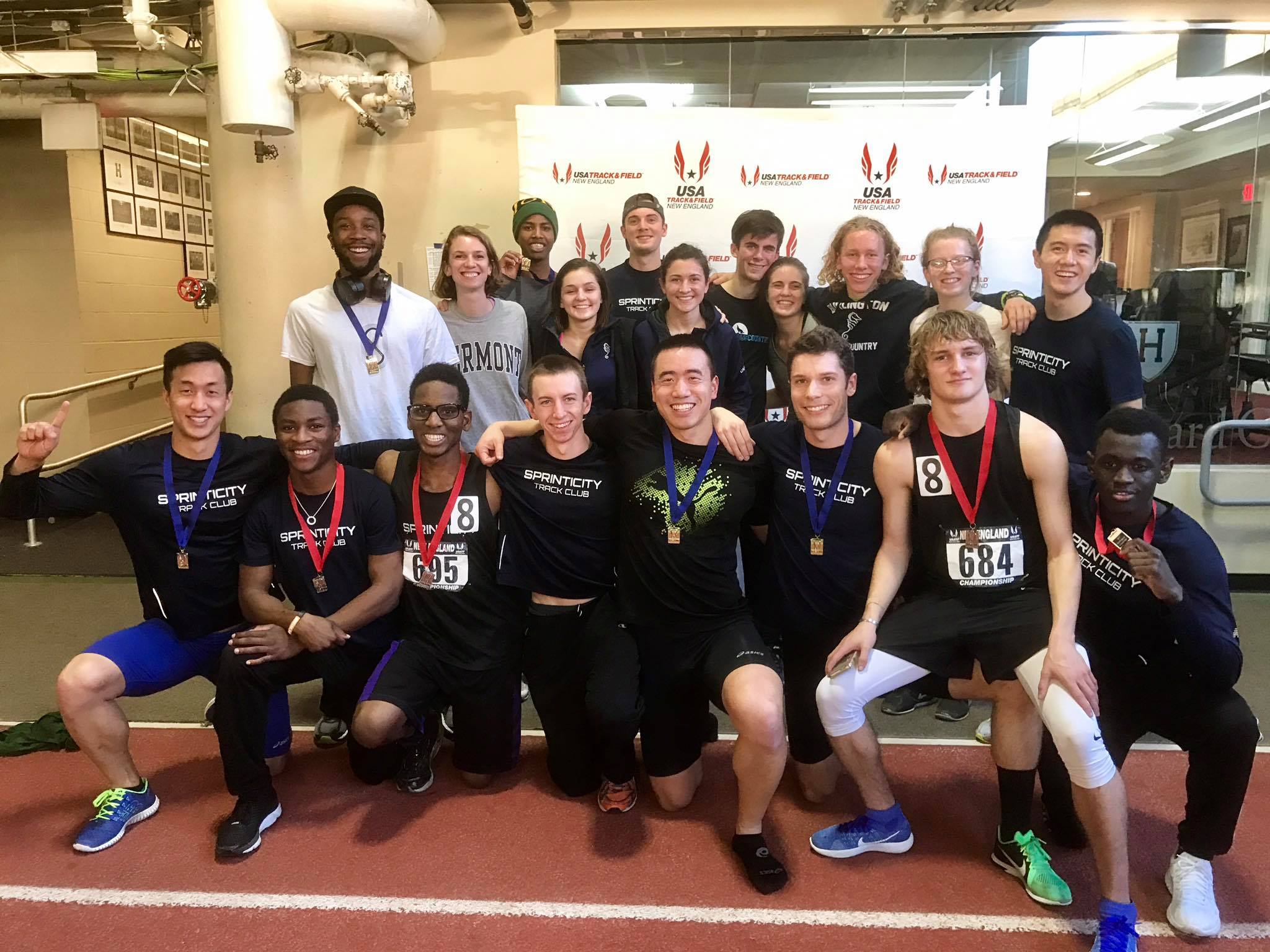 It’s becoming a familiar title for Sprinticity. A couple of years ago our women’s team won the outdoor New England title. Last summer, our men’s team was able to match that accomplishment. However, we hadn’t been able to pull together a championship team for the indoor championship. Getting enough athletes to the meet has been the greatest challenge in the past. The meet is always at Harvard because many of the clubs are based around Boston; we travel farther than almost every other club in the New England Association. This year, our high school athletes were able to join and that made all the difference.

Our women’s team score scored 26 points to win the championship. They finished 8 points ahead of second place. In total, there were 19 teams that competed in the women’s competition. Our well-balanced team scored in the sprints, hurdles, jumps, and distance events.

Our men’s team scored 43 points, 32 more than second place. A total of 17 teams scored in the men’s competition. The dominant performance was set up by team depth and scoring points in sprints, hurdles, jumps, throws, distance, and relays.

To cap off the day, we entered 2 relays in the men’s 4×440 yard relay. Yes, Harvard has a track measured out in yards; one lap is 220 yards. For the open events, they can mark the track so that race distances end up being meters. For the relay though, it wouldn’t make sense to have an exchange zone that shifts a few meters per lap so it’s done as an old school 4×440 yard race.

The high school boys, full of youthful exuberance, wanted to race the old guys that are trying everything possible to fight off dad bods. The relays teams were as follows:

Abi drew lane 6, and Kevin was on his inside in lane 5. The stagger was gone before the first turn. Kevin set the pace for the field by taking a big lead at the break, daring the other runners to match the intensity and inevitable pain on lap 2. Abi obliged by separating from the pack to chase Kevin during lap 2. The lead established in the opening lap remained steady during the second lap, and Kevin handed off to Will with a 10 meter cushion.

Madey got the baton from Abi and fought hard to close the distance, but Will extended the lead by another 10 meters for Kyle. The third leg was a showdown of two guys that are known more for their explosive speed in the short sprints. Seth and Kyle ran exceptional first laps and carried through 300m with plenty of speed. Both of them hit the proverbial wall and were thankful to pass the baton off. At this point, Kyle had stretched the lead to at least 30 meters.

Ethan’s task was to hold off the fastest high school 400m runner in the state of Vermont. Ismail was up for the challenge and cut the distance in half after a blistering 23 second split through the first 200. Ethan stayed steady though and Ismail ran out of gas in the last 100. The old guys finished in 3:31.55, and the kids ran a 3:33.22. Third place… 3:44.51.

That relay was the exclamation point on a well-deserved championship performance by our club. In three short years, we’ve gone from an idea to a reality. It took a lot of hard work and commitment along the way. We’re so happy and so proud to share this idea with folks and see them join the journey. The club continues to grow and we’ve now claimed New England titles for both genders, indoor and outdoor. This is now the standard of expectation for what is possible by Vermont athletes. We’re not showing up to meets just for the experience. We don’t want participation trophies. No, Vermont is too talented for that. We are New England Champions.