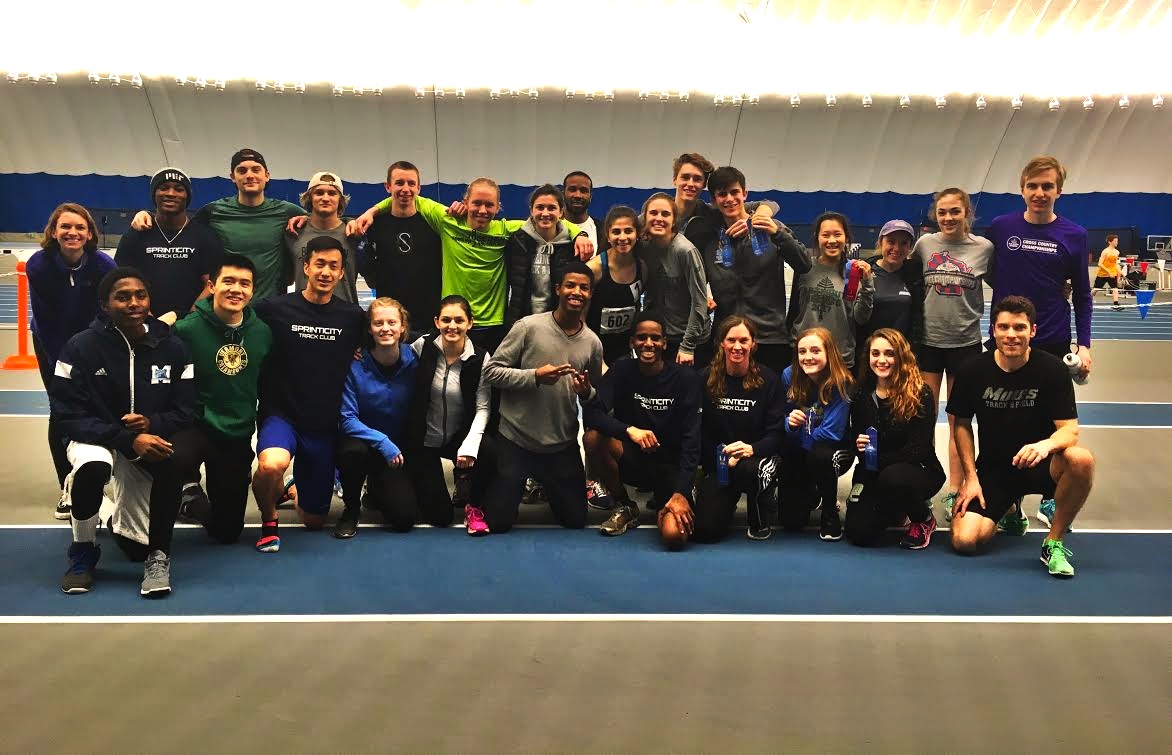 Six days after our New England championship effort at Harvard, our team was on the road again. We received an invitation from the Adirondack President, Rick Choppa, to participate in their championship at Utica College. In 2015, Utica opened up the Tod and Jen Hutton Sports and Recreation Center.Â It is an amazing 135,000 square foot dome that holds an 8 lane, 200m track with adjacent jump pits and turf field.

The first event of the meet was the 3000m Race Walk. There were three competitors entered: Emerson Hernandez and Dave Talcott of Shore Athletic Club, and Kyle McLane of Sprinticity. Emerson Hernandez represented El Salvador at the 2012 London Olympics. Dave Talcott has competed as a member of Team USA at the Pan Am games. Kyle had never done race walk before in his life.

Emerson kindly took some time out of his own warm up to assist Kyle in learning the basics of race walk technique. He even had brochures handy and invited Kyle to join him in the Bronx for some clinics later this month. It was an educational process for all of us to watch an elite level athlete demonstrate his craft. Emerson breezed through to an astonishing 12:41.01 for 3000m. Dave Talcott finished in 14:07.47. Kyle McLane finished… that’s quite an accomplishment. Actually, he broke 20:00! Kyle’s time was 19:59.08. He is now the South Burlington High School and Sprinticity Track Club record holder for the 3000m race walk.

Our usual suspects in the short sprints put on a show in the 60m and 200m dash. Ethan Fontneau, Seth Beard, and Abayomi Lowe contested both of the sprint races and all three of them finished in the top 5 for both races to secure big points for our club. In the 400m, Madey Madey stepped up and ran a personal best of 53.90 to take third.

Katharine Montstream dominated the masters competition. She competed in the 400m, long jump, and triple jump and finished 1st in all three of those events in her age group with performances of 1:09.41, 3.95m, and 8.93m respectively.

We had event winners in two other individual events: 60m Hurdles and 1500m run. Kevin Chu won the hurdles in 8.49 and Nick Knudsen finished second in 8.95. The duo of Oliver Wood and Kent Ford combined to take first and second in the 1500m with times of 4:11.41 and 4:16.12. The two of them separated from the field early on and turned it into a head-to-head race after just a couple of laps. Oliver was able to put the race away with about 400m left by showcasing his improved sprint mechanics.

The final event of the meet was the 4x200m relay. Just like last week, we decided this was a great opportunity to have a bit of fun and showcase the depth of talent within our club. We put together two relays that placed first and second by a considerable margin. Our ‘B’ team even included two distance runners. Kent and Oliver displayed their athleticism and the importance of speed training for endurance athletes by running two legs of a 1:37.34 relay. The ‘A’ team was victorious in a time of 1:34.64.

The day came to a close and we had to pile back into the yellow school bus that brought us to the meet. Our team left the track with many smiles and a lot of ribbons. Sometimes it can be hard to pick an athlete of the meet when the entire team has so many successful performances. This time it was easy. Kyle McLane made the podium while racing two world class athletes. Well done, kid. You’re an inspiration to all of us.