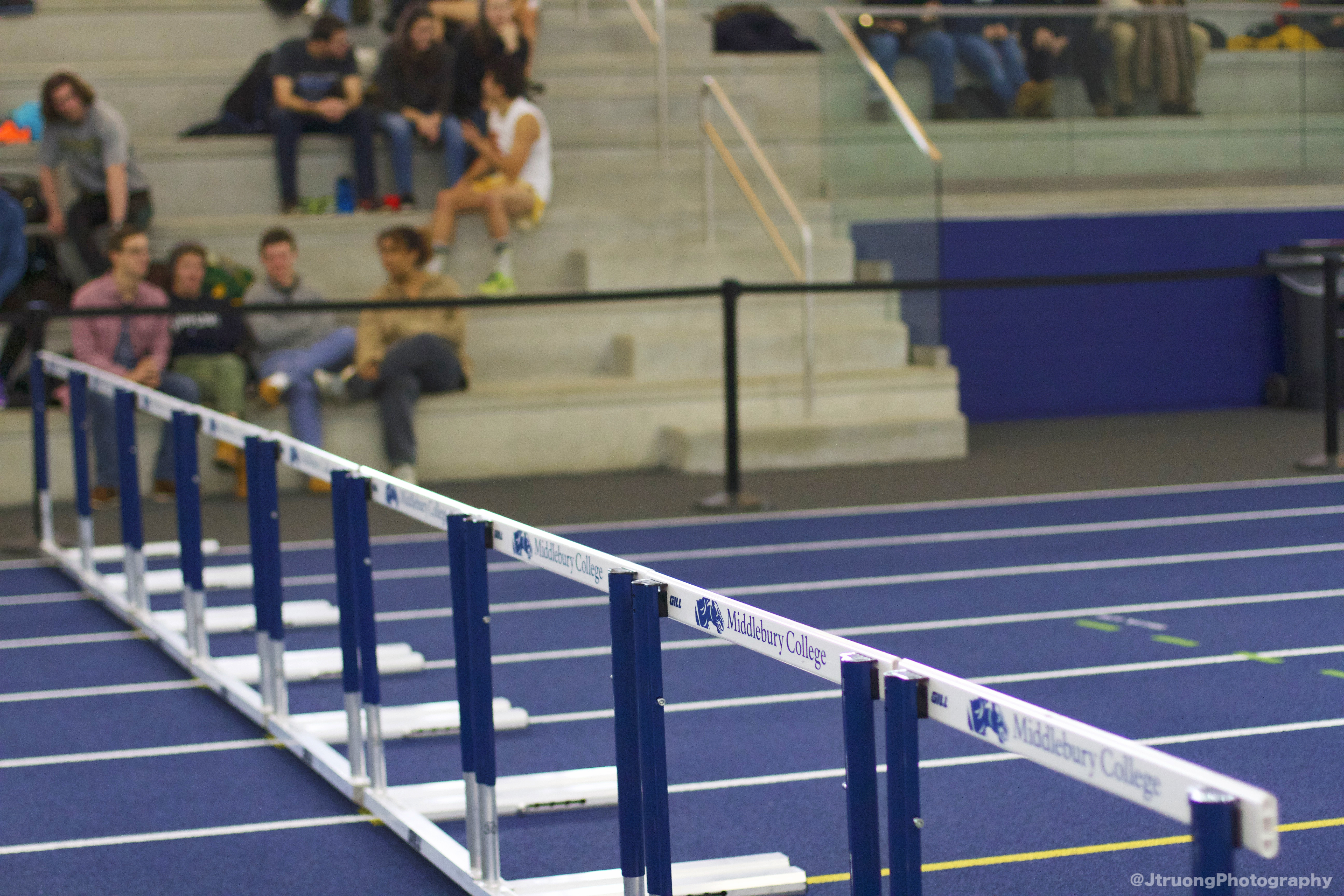 If you haven’t been to the Middlebury College indoor track, clear a day on your calendar so you can visit. It is truly one of the best kept secrets in the state of Vermont. Middlebury opened the doors to Virtue Field House in January of 2015. It is the best indoor flat track facility in the country. As Middlebury describes it: “The 110,000-square-foot structure houses the New Balance Foundation Track, a 200-meter track with nine 60-meter sprint lanes. Dedicated jumping and vaulting areas beyond the oval for field events are also part of the facility, as is McCormick Field, a 21,000-square-foot Field Turf surface inside the track for varsity, club, intramural and recreational purposes as well as throwing events.”

I overheard Oliver say, “Holy s***, I didn’t know we lived so close to heaven!”. The Middlebury coaches were gracious enough to extend an invite to Sprinticity to take part in their Winter Classic. Other teams in attendance were Oswego State, Castleton University, and University of Maine at Farmington. Since this is one of the closest venues that we compete at, our squad was able to bring a large number of participants. For this post, I will focus on a few athletes that made their club debuts.

Julie McGilpin was one of the athletes making her Sprinticity debut. She ran division 1 collegiate track at University of Vermont and has been in Burlington working and coaching since graduation. Her comeback race turned a lot of heads. Julie took the lead right from the gun in the first event of the day, the women’s 1 mile run. That was the closest that any of the other competitors could get to her. She ran a 5:07.89 leading wire-to-wire and setting a new Virtue Field House record! If the mile wasn’t impressive enough, Julie doubled back later in the meet to race the 1000m run. Another race, same results. Julie ran a 3:06.13 to beat Midd Alum, Alex Morris.

The second female athlete to make a Sprinticity debut was Chelsea Davidson. She came into the meet with total of 5 practices under her belt… lifetime total. Chelsea has a background in cycling and ballroom dancing, but recently decided to try a new sport. She had never worn a pair of spikes until 45 minutes before her race. Chelsea ran the 200m and finished in a time of 32.23. The great thing about running your first race is you get to set a personal best! A personal benchmark has been set, and we look forward to seeing Chelsea progress in her new sport. On the men’s side, Ed Simon competed in his first meet as a Sprinticity athlete. Ed is a native Vermonter. He grew up in Burlington before moving to Georgia, VT. His childhood was spent running through the woods, hopping over streams, and climbing trees. That early training naturally evolved into hurdling and pole vaulting in the track and field world. Ed showed his track talents by winning the 60m hurdles in dominating fashion. His 8.49 was the only performance under 8.70. Track is only half the battle though; Ed is equally capable in playing the field. Pole vault has always been one of his specialties.Â He took home first place in that event as well with a jump of 4.43 meters. First meet, two events, two wins. We’d also like to give a special shout out to John Truong; He is a good friend of the club and a rising talent in the world of photography. John traveled with us to Middlebury in order to try his hand at sports photography. He took so many incredible photos that we decided to create a separate photo album page just to feature his work. Visit John’sÂ personal page to see his other work.