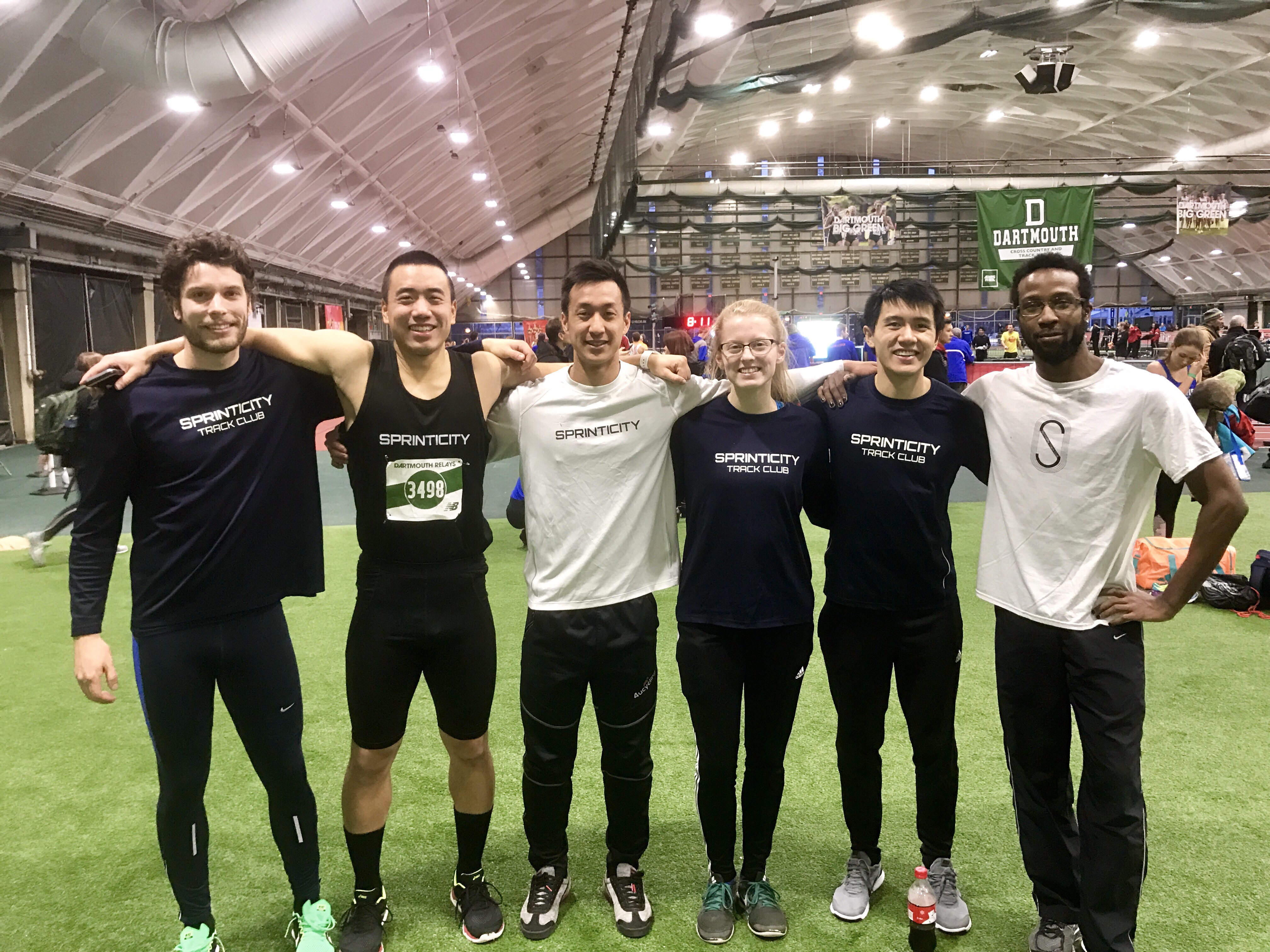 But on the third day he will rise again.

The youth set the tone for the weekend during the high school portion of Dartmouth Relays. On the third day, those of us that can vote and buy lottery tickets dragged ourselves out of bed and made our way across the state line to compete at Dartmouth. Day three featured the masters, college, and open competitions. The kids call us old; we call ourselves experienced. We used that experience to rise to the occasion after a month of training.

Kevin Chu was the first athlete of our squad to step onto the track. The men’s 60m hurdles prelims placed Kevin in a heat with Alec Eschholz. Just a week before the race, the two men shared a lane at UVM training together in preparation for this race. Eschholz is undeniably one of the best athletes to have ever competed in the state of Vermont. He is currently a student athlete at Dartmouth and has continued to excel at the collegiate level. This preliminary race saw both Kevin and Alec advance to finals comfortably in 8.38 and 8.40 seconds respectively. Kyle Chu and My Mai made a comeback in the 60m dash. They have been dealing with chronic injuries from before their Sprinticity days and the club has given them new lift. It had been a while since either of them have competed in this event. Kyle ran a 7.55, and My Mai ran 7.39. Neither of them were thrilled by the times, but both of them understood that it was just a part of the process of rehabilitation. Their excitement from just finishing the race unharmed set a great perspective for the day. Be thankful that our bodies allow us to perform such movements and enjoy each opportunity.

Whatever shred of gratitude Will Supple and Ethan Fontneau had disappeared in just under 53 seconds. That’s what the 400 meter dash will do to you. It is an unforgiving, punishing race that makes you question why you do track. Will and Ethan were drawn in the same heat and ran the first lap separated by a single lane. Ethan ran a strong first lap and stuck with the leaders as they rounded the second turn and broke for the inside lane. Will steadily advanced his position after a controlled start. At 250 meters, Will made a move on the outside to close the gap on the leaders. Ethan tucked in to hold the second position around the final turn, but was passed by Will in the final 5 meters of the race. Will finished second in the heat in 52.72, just ahead of Ethan’s 52.78. Both of them walked off with heavy legs and a sense of dizziness. Be thankful if you don’t run the 400m.

On the infield, long jump couple My Mai and Emily Kollar had quite a day. Emily jumped 4.64m. It was her second meet in a row surpassing 4.60m. Consistency in this range has her hopeful that she will soon be able to surpass the elusive 4.90m that has been her long term goal. My Mai warmed up with the 60m and carried the speed onto the runway. A strong series in prelims earned him three more jumps in finals. His best mark of the day was 6.36m, a new personal best.

The hurdle finals was a showcase for Vermont. Kevin Chu and Alec Eschholz took to the track for another opportunity to display their talents. All eight of the finalist were under 8.65 seconds in the prelims with less than 0.3 seconds separating the entire field. Alec had been working on a 7 step start to the first hurdle and he reacted quickly to the starting gun. Kevin was slower to react, but didn’t panic and worked through his acceleration pattern to close down the gap.

There was very little separation over and through the first couple of hurdles. By hurdle three, Kevin started to pull away from the field and Alec followed. They approached the final hurdle and took off simultaneously. On the run-in, Kevin pushed ahead and out-leaned Alec to take first place with a time of 8.22. It was a personal best for Kevin and his second time running under 8.3 seconds. The final race of the day for Sprinticity was in the 4x200m dash. This was simply a fun way to celebrate the great month of training that the club had leading up to the meet. Kevin, Kyle, Will, and Ethan combined to comfortably win the second section in a time of 1:34.02, and average of 23.5 per split.

We may be old, but we’re not dead. There’s still a lot of speed left in these legs. On the third day, we rose.