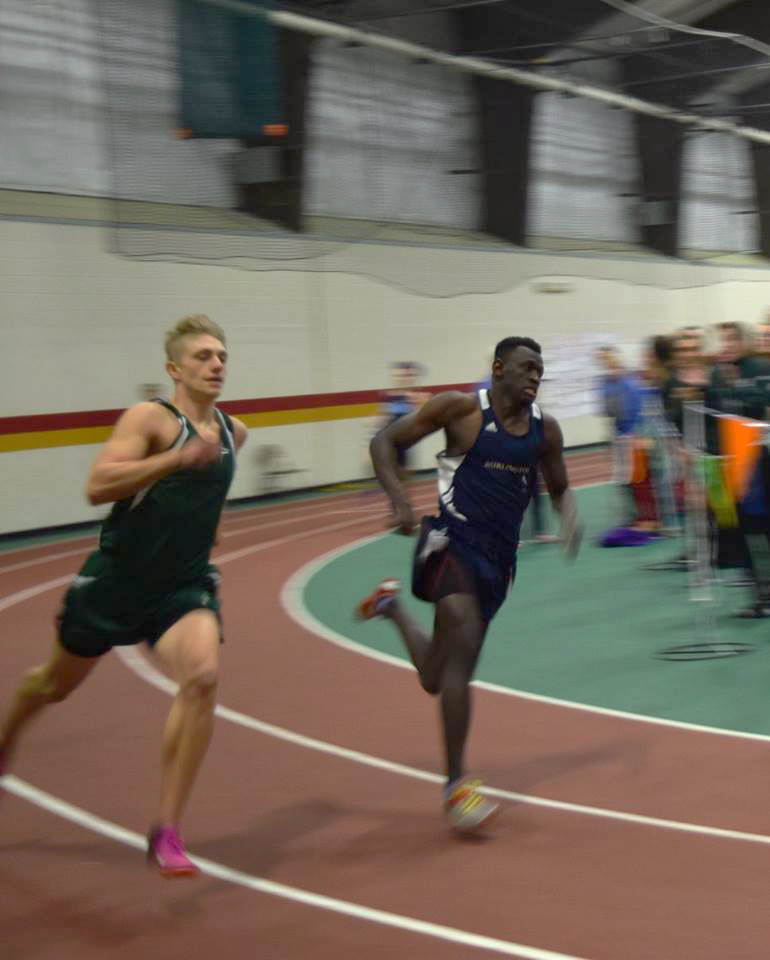 The final indoor track meet of the season was held at the Shapiro Fieldhouse at Norwich University this past Saturday. Â Some familiar names continued to leave their mark on Vermont Indoor Track. The usual list of names topping events were in regular form, setting records and bringing home as many first place medals as they possibly could. In the Division 1 competition, Saint Johnsburyâ€™s Ian Clough took home first place in the 55m, tying Eric Groceâ€™s state record of 6.50 from 2002, first place in the 55h, first place in long jump, and second in the 300; while his female Saint Johnsbury counterpart Katherine Cowan won the 55, 55h, 300, and high jump. Individually, Cowanâ€™s efforts would have been enough to score 4th place in the team competition. Burlington sophomore Kent Ford also continued his domination of the mid distance events, winning both the 1000 and the 1600. Meanwhile in the Division 2 competition, Rice Memorialâ€™s Sonia John maintained her presence as the fastest girl in the state, winning the 55, 300, 600, and 4×400, bettering her own state record in the 55 by .01. Mount Abrahamâ€™s Lydia Pitts also took home first place in the 55h, long jump, and triple jump.

Some other notable performances of the day came from Burlingtonâ€™s Destine Brown, who set the state record in boys D1 triple jump (42â€™ 7â€), setting the mark 6 inches further than Burlingtonâ€™s Alex Joyce did in 2012. That record is pending though, as the sand at Norwichâ€™s jumps pit is too low to be considered a legal pit. Rivendellâ€™s Owen Pelletier had the farthest long jump of the day (21â€™ 0.75â€), and was also the only athlete this year to break 21 feet in long jump. This was yet another Division 2 state record performance, breaking Cole Chapmanâ€™s record from 2015. Missisquoi Valleyâ€™s Hunter Tardy notably placed second in three events on the day as well. The existing state record holder for boys D2 shot put, Tristan Larocque, set another state record in the weight throw, throwing 50′ 4.5″, winning by almost three feet.

These state records may have been overshadowed by a more bizarre state record though. The meet started at 1:30pm and didnâ€™t conclude until 1:30am. Girls division 1 triple jump didnâ€™t even start until 12:45am. The athletes had had a very long day to begin with, no food is allowed in the fieldhouse, yet somehow athletes are expected to stay fueled up for 12 hours? Coaching girls in triple jump at 1am was a new experience for all of us, but South Burlingtonâ€™s Amelia Pape remained unaffected, winning the competition with her final attempt, jumping 36â€™ 1â€.

The race of the day for me had to be the boys Division 1 300. A face-off between Ian Clough and Ismail Liban. The undcontested fastest short sprinter in the state vs the undisputed fastest long sprinter in the state. I like to think of this as Bolt vs van Niekerk. The battle of pure top speed vs speed endurance. I overheard Libanâ€™s coach telling him that he better not get caught sleeping in the first 100m of the race, because catching up to Clough would not be an easy task. The race lived up the hype, as Clough had the lead through 200, but Liban was able to power through the last curve to win by just over a half second.

Sitting on the sidelines today was Montpelier’s Jeremy Hoyne-Grosvenor. Â The overall state record holder in the 1000, 1600, and 3200 chose to opt out of competing at states, with bigger ambitions later this season. Â Our club saw him running a workout at UVM on Friday night, less than 24 hours before states. Â Prompted by curiosity, we inquired with him and his coach as to why he was pushing himself such a short time before an important meet, to which they informed us that their focus is on New England’s and New Balance Nationals in early March.

We are also seeing a great rivalry being born in the boys Division 2 sprints, as Harwoodâ€™s Seth Beard and Hartfordâ€™s Abi Lowe have established themselves as the kings of D2 short sprints.Â Â  Set for battles in both the 55 and 300 today, they both cruised through prelims of the 55 to meet in the finals. Beard proved himself to be too eager out of the blocks though, as he false started, giving Lowe the easy win. Later in the day, Beard enacted his revenge by beating Lowe in the 300 by a razor thin margin of .08s. Weâ€™re looking forward to seeing more battles from them in the seasons to come.

What’s next for this season? Those that qualified will be heading down to Massachusetts next month to compete at New England’s to prove themselves against the best from all around New England. Â Look for Liban, Clough, Cowan, John, Hoyne-Grosvenor, Larocque, Pape, Beard, Â Lowe, and others to make a statement and show the rest of New England the talent that Vermont has.

Results can be found here.